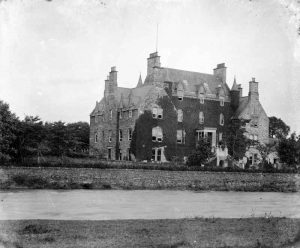 In this collection of carefully researched blog posts, our resident historian (and wonderful Office Manager) Kay Jackson delves into the stories that shaped our buildings, and the buildings and communities around them.

There are still many families who will remember visiting the very stylish Park House Hotel & Restaurant at some point in their lives … that includes one of our team here at Gairland. Coming from a busy farming background, eating out was definitely not a regular occurrence for the family in the 1970s, but she does remember one or two special occasions being celebrated there. We’d like to share her recollections with you …

‘My memory of the hotel was definitely based on the grand surroundings … the majestic stairway leading to the front door, with steps which had been slightly worn away by the thousands of feet that had tread there … spiral staircases, the stately lounge bar, which had an array of colourful liquor bottles never seen before, ornate chandeliers and not least the restaurant with starched white linen tablecloths and stiff napkins that rarely stayed on your lap! Of course, it was a rare sight to see my Dad in a collar and tie and I recall he looked very dapper when he was all spruced up.

The menu featured classic favourites such as prawn cocktail, pâté, steaks, freshly caught local fish … and then a delightful touch of Europe and the Far East with Pork Cordon Bleu and Oriental Pork. This was a far cry from mince and tatties! It was a time when there was a strong desire for chefs to try out new culinary recipes using herbs and spices much more freely. There wasn’t a vegetarian or vegan dish in sight.

Then there were the delights of Black Forest gateau, lemon meringue pie, peach melba and apple crumble with plenty of thick double cream or custard … or both. A ‘sweet trolley’ was all the age during the 1970s, but I can’t recall if this featured at Park House? It certainly featured at the old Oakwood Motel outside Elgin. It often led to diners … well, we used to do it all the time … asking for a ‘a wee taste’ of several desserts!

The standard wines included Blue Nun or Mateus Rosé as the tipples of choice at that time. With rationing not far from my parent’s memory, eating out was becoming the ‘in thing’ in the 70s. I’m sure I hadn’t a clue what ‘A la carte’ meant back then … but it sounded posh. My one regret is not having had photographs taken – it certainly wasn’t the ‘done thing’ back then to be taking out your Kodax camera during a meal – but still, these are happy memories from childhood days.’

The Park House Hotel and Restaurant prospered for quite a few decades and there were many disappointed people when the doors finally closed on this iconic family run hotel, which took advantage of the best of Moray’s finest produce in preparing their dishes.

But changing times brings changing needs and new opportunities. It is pleasing to know that this fine Georgian building, which was built as a grand town residence in the early 19th Century, then turned into elegant hotel and restaurant facilities, has received yet another careful refurbishment in the last decade to provide contemporary office space while still maintaining its distinctive Georgian features.

I wonder if any of you have any special photos of Park House in the glory days? Feel free to send these on for us to feature in future articles …

Chat with us on WhatsApp

We’re here to help you find the right space for you, your family, and your business. Our holdings are spread, but focus mainly on residential and commercial projects in Caithness and Moray. Our mission is to create great, natural and enjoyable places. Please don’t hesitate to contact our friendly team, we’d be happy to show you around our spaces.

Copyright © Gairland LLP 2010-2023 – all rights reserved. Designed and built by Baxter + Company. Gairland is proud to be a living wage employer. To see our latest vacancies, click here.